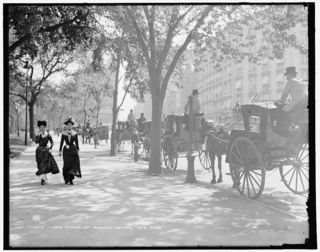 Undergraduate Advisor, Department of American Studies, University of Maryland, College Park, May 1997--May 2000.

For Back Story, interview (off-air) for radio show on reenacting, September 2012

For the Orlando Sentinel, “War Games: Playing with Fire,” expert commentary on history and meaning of war reenacting. Story by Aline Mendelsohn, 24 January 2006.

For The Baltimore Sun, “Déjà Vu: Fact and Fiction About the War in Iraq Come Face to Face in the New FX Drama ‘Over There.’” Story by David Zurawik, 24 July 2005.

Editor, A Classic Town: The Story of Evanston by Frances Willard, first published in 1891. Lulu Press, 2014.

Editor, My Hut: A Memoir of a YMCA Volunteer in World War I by William C. Levere. IUniverse, 2006.

Entry, "Robert Capa," in The Encyclopedia of the Home Front: World Wars I and II. Thaddeus Russell, ed. ABC-CLIO, 2006.

Presenter. “Cultural Connections: Performance, Authenticity, and ‘The Break’ in War Reenacting and Hip-Hop.” Presentation with Greg Wahl for students and faculty, University of Maryland, College Park, 1997.

Panelist. Discussion on Politics in the Classroom. Sponsored by the Department of American Studies, University of Maryland, College Park, 1996.

Review of Patriotism, Peace, and Vietnam: A Memoir by Peggy Hanna. (Left to Write, 2003) and The Price of Freedom: Americans at War, Smithsonian Institution Exhibition Catalogue (Seattle: Marquand Books, 2005) for the Journal of Material Culture. (2006).

Review of The End of the Age of Innocence: Edith Wharton and the First World War by Alan Price. (New York: St. Martin's Press, 1996) for HMGS Military and Naval History Forum, 5 (March 1997).

“My Hut: The Experiences of a YMCA Volunteer in France during World War One,” presented to the Osher Center for Lifelong Learning of Northwestern University, in March 2007, in Evanston, Illinois.

“My Hut: The Experiences of a YMCA Volunteer in France during World War One,” presented to the Kiwanis Club, in March 2007, in Evanston, Illinois.

“My Hut: The Experiences of a YMCA Volunteer in France during World War One,” presented at the Evanston Historical Society, in November 2006, in Evanston, Illinois.

“ ‘You Can't Fight Here! This is the War Room!’: Conducting Online Ethnography,” presented at the Cyber Culture Working Group Conference in October 1999, in College Park, Maryland.

“Public and Private Pasts: War Reenacting and the Ownership of History,” presented at the American Studies Association Conference in October 1997, in Washington, D.C.

“Responses to War Reenacting,” presented at the Conference on Cultural Violence in March 1997, in Washington, D.C.

“‘It's Not on the Page Anymore’: War Reenacting and the Construction of the Past,” presented at the North East Popular Culture Association Annual Meeting in November 1996, in Hamden, CT.

“Conversations with History: A Study of World War Two Reenacting in America,” presented at the Popular Culture Association National Meeting in April 1995, in Philadelphia, PA.

“Framing the Doughboy: The American Soldier in Photographs, 1917-1919,” presented at The Western Front Association Conference in June 1993, in Arlington, VA.

“Washington Allston as Gil Blas: Temptation and Regeneration in Allston’s Donna Mencia,” presented at the Middle Atlantic Symposium on the History of Art, at the National Gallery of Art, Smithsonian Institution, in April 1991, in Washington, D.C.

UNIV 101, “Introduction to the University and Computer Resources,” College of Arts and Humanities, University of Maryland, College Park

2006, Colby Award Nomination for War Games: Inside the World of 20th-Century War Reenactors.